It wasn’t too long ago that cell phones were limited to flip phones and Blackberries. Remember Blackberries? Not too long ago, they were pretty cool, with the little keyboard and the bulky design. If you used that keyboard for long enough, your hand would get really sore. Of course, back then, they were pretty cool. They were all that we had. Soon enough, the iPhone came along, and it changed everything. We had the touchscreen and the camera, not to mention Wi-Fi and the App Store. Once the iPhone came out, it wasn’t too long after that when Android phones started coming out. Thus, a kind of war emerged -- Apple fans versus Android fans. To this day, that battle is still raging, with no clear winner in sight.

Due to the increasingly connected nature of our world, we are conducting a number of important transactions online, through systems that are lacking in the necessary security protocols. While most businesses will insist that they are secure and invulnerable to hacks and data leaks, that really isn’t the case. Not always, anyway. And this isn’t necessarily their fault because software progresses so fast and new viruses are being created and tested every day. There is some good news, though, most of those viruses are of exceptionally poor quality and they are no threat to you or your information.

Unfortunately, though, there are a number of viruses that do work very well, and these viruses are a threat to you and your information. Things like identity theft and credit card theft are very common these days because of the decentralized nature of the systems that we use to conduct transactions with our credit cards and debit cards and other important pieces of our financial entity.

If you are someone who uses an Android smartphone, then there is one thing you need to be wary of. On the Google Play Store, there are many apps that have these things called “Hidden Privileges”. These privileges aren’t actually hidden, but many people gloss over them or just don’t pay attention.

Find one of those “Flashlight” apps on the Play Store, and you might find that it asks for access to your microphone. Strange, right? Well, most people don’t bother reading the privileges, and what ends up happening is that, while you’re using the app, your voice is being recorded and that data is being sent over to a server somewhere.

Most of the time, the people who made the app don’t get lucky in overhearing someone’s personal information. But sometimes, they do. Remember, make sure to look at the privileges an app needs. If something seems off, chances are, it is. Also ensure that nobody gets hold of your phone to install a spy app -- these can monitor ALL your communications. Be careful what you do on a work phone -- you be being monitored.

As for the most secure smartphone on the market, here it is! 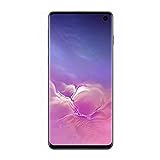 This is truly the most secure consumer smartphone on the market today. Other phones exist, many of which you could argue are more secure, but those phones are made for things like businesses and people with an enormous amount of technical experience and understanding.

One of the first things that comes to mind with regards to the S10’s security, is the fact that it has a number of biometric security features. Using face recognition, you can lock your phone and prevent anyone from getting into your phone and accessing your information.

You can also combine facial recognition by having a PIN, then a fingerprint scan, and, finally, a facial recognition scan. Those three can easily be set up in order for you to have a very secure phone. If you are someone who often uses your phone for financial transactions and you have a lot of important information on your phone, setting those three things up is recommended.

Is Samsung Galaxy S10 the Most Secure Smartphone?

Some controversy occurred when hackers manipulated the facial recognition system by using contact lenses, but it was quickly patched and you can expect that any further errors will be quickly patched, as well.

On top of this, Samsung developed a system known as “Samsung Pay”. This system comes with military-grade encryption for payments and financial transactions of any kind, and allows for the security of any and all files and data that is held on the device. One of the things that the encryption system can do is lock certain elements of your phone behind specific security scans. So, for example, you could lock certain websites or applications -- such as a financial application -- behind a facial recognition scan or a fingerprint reading.

Our final piece of information has to do with “Samsung Knox”. This is, essentially, a virus protection/prevention software. But the big thing that separates it from any other piece of software is the fact that it doesn’t just exist on the software level, it’s actually built into the hardware of the device.

Even when your phone is off, the data is still encrypted and secured behind layers of security. This is because the system is built into the processor and into the chipset itself. The benefits of this are innumerable, and the big thing to take note of is the fact that this makes it certain that your payments and your transactions are completely secure and that nobody will be able to intercept them from an external device. Along with that, due to the security on the software side of things, even if someone took your phone, they wouldn’t be able to get your information.