Looking for the most secure external SSD/hard drive money can buy? We have a few options to offer to you below.
We’ll give you an in-depth overview of what you could expect from each of the storage drives on the list, both in terms of security and in terms of performance.

If physical security is key for your job, then take a look at this 1TB external SSD by SanDisk. This thing has all the benefits of external SSDs, but it’s much more robust than a typical solid-state drive.

The Extreme external SSD is designed to be water- and dust-resistant (IP55 rating). More specifically, it is tested to withstand a water flow at a pressure of 30 kPa for 3 minutes.

Aside from that, this thing is vibration-resistant and shock-resistant up to 1,500 G. Temperatures also aren’t a problem for this guy since it can operate in temperatures from 0 to 45 degrees Celsius and survive in -20 to 70 degrees.

Aside from exceptional durability, this storage device delivers all the benefits you’d expect from an SSD. With read/write speeds of up to 550/500 MB/s, this SSD is fast, though it’s certainly not as fast as modern NVMe M.2 SSDs.

This SSD operates on the USB 3.1 Gen-2 interface, as well as includes a USB 3.1 Type-C connector for compatibility with a wider range of devices.
In terms of storage capacity, this thing is also decent – 1 TB of storage capacity should be quite enough for most people. There are larger and smaller options as well, so you may pick one that will better suit your storage needs.

Keep in mind that this SSD comes formatted exFAT out of the box, which may not suit your specific needs.

The Samsung T5 portable SSD offers decent physical protection, but it’s much better than the SanDisk Extreme SSD in terms of data protection. This is thanks to the AES 256-bit hardware encryption.

Performed by a separate encryption module, the hardware encryption in this SSD allows for faster encryption and increased security compared to software encryption. Not only that, but for the time being, the AES encryption standard is the best bet in terms of security, as we discussed is our best flash drive article. Even governments have adopted this standard in data protection.

This SSD is fairly shock-resistant as well, having been tested to withstand up to 2-meter drops. With that said, the overall physical protection of this SSD is far weaker than in the SanDisk model.

In terms of speed, this SSD is a little slower, but not by much – it has read/write speeds of up to 540/520 MB/s. This small difference in max speed probably won’t be noticed in practical applications.

The T5 SSD again relies on the USB 3.1 Gen-2 interface, and Samsung also includes USB Type-C and Type-C to A cables with this thing.
Be mindful that this SSD appears not to be formatted for use with Macs out of the box. You’ll need to format the T5 manually, but fortunately, this is very easy to do. 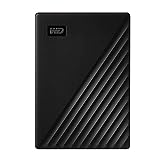 The Western Digital My Passport external HDD won’t be nearly as quick as SSDs, but it’s superior to the overviewed SSDs when it comes to security.
First of all, the My Passport HDD comes with the WD backup software that allows you to back up your data and save it automatically in accordance with your schedule.

Secondly and more importantly, the My Passport hard drive features password protection backed by AES 256-bit hardware encryption. At the moment, there’s no way to go more secure than this.

What is also better in this external HDD is storage space. While you can find 2TB and bigger SSDs, they aren’t widely available and are very expensive. My Passport offers storage capacities from 1 to 5 TB for much less money than with an SSD.

With that said, given the slower read/write speed of My Passport, this external HDD is going to be a better option for backup storage rather than fast and secure file transfer. Nothing beats SSDs in regard to file transfer, but if you want long-term storage space, then My Passport should be a great option for you. 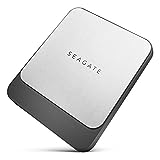 Finally, we have the Seagate Fast SSD (this is literally the product name). The particular variant of the SSD we based our review on seems to be a good option for those who deal with photography since you are getting 2 months of free membership at Adobe Creative Cloud Photography.

Aside from this, Fast SSD comes with Seagate’s folder syncing software that allows you to mirror files from your PC to the external SSD. The folder syncing will be done by the software automatically.

Being an SSD, Fast SSD boats fast read & write. Even though it has the older USB 3.0 interface, it’s rated no slower than the 2 other SSDs that we’ve already reviewed.

The capacity in the SSD we based on was 500 GB, but there also are 1 and 2 TB versions available.

The not so good thing about Fast SSD is that the goodies included – particularly, Adobe CC Photography plan – make it a little pricey. If your job isn’t related to photography, this variant of Fast SSD will be a waste of money.

Cons:
• All the included stuff makes this SSD pricey.

One thing you may be wondering about is which one to go for – an HDD or SSD?

Well, if you are familiar with the technical differences between these two types of storage devices, then you probably have a feeling as to which one to choose. If you don’t, then let us give you a hint:

• Choose an SSD if you need fast read & write rates. This will be useful if you will be very often moving files to and from the drive.
• Choose an HDD if you need a cheap and high-capacity drive for long-term file storage with only rare file transfer.

To be fair, an SSD can do nearly the same things that an HDD can, but faster. Even in terms of capacity, SSDs aren’t that far behind HDDs, though the largest drives out there tend to be HDDs.

So if an SSD has similar functionality to HDDs and is faster, why even bother with HDDs?

And the answer is that HDDs are much cheaper than SSDs. While SSDs aren’t as expensive as they used to be a few years back, they still are noticeably more expensive than HDDs with the same capacity. This means that if you don’t need fast read/write performance, then an HDD would be a better option.

In terms of security, we can’t say that one drive type is better than the other. Both can have things like hardware encryption, and both can be backed up by software to further improve security. With this in mind, first decide what you need and only then focus on specific security features.

While the throughput of SATA 3.0 and USB 3 isn’t that different, what differs is how they handle their connections. USB 3 has higher latency due to a couple of reasons. Most importantly, it’s just not designed for storage drives specifically, and this implies certain issues as increased CPU load and the inability of USB 3 to simultaneously send and receive data.

We’re not even talking about USB 3 vs NVMe M.2 drives that are only limited by the throughput of PCIe. PCIe can be several times faster than either SATA or USB. For max speed, you would want to go for an NVMe M.2 SSD.

With that said, the whole point of external SSDs or HDDs is their portability, and you have to sacrifice something to achieve that. And if you need portability, then know that you won’t be getting the fastest drive out there, though higher-end external SSDs can be very fast.

Final Words
Hopefully, we have been able to help you with finding the most secure external SSD or hard drive for your needs.
Have a good look at the features of the overviewed storage drivers. Then, try to understand what you exactly need, both in terms of drive speed and security features. But don’t rush your decision since you don’t want to make an expensive mistake!

The most secure laptops