A bike lock is essential for when you are leaving your jewel on wheels behind for hours, or even minutes. Whether your sweet ride is in the adorable Dutch-style or it’s more of a rugged off-road adventure partner. Considering that over 2 million bikes are stolen each year, it’s better to be safe than sorry. Here is all you need to know about the most secure bike locks and choosing the perfect one for you.

Generally, there are five types of bike locks, each with its own pros and cons:

Locking your bike isn’t just about security, it’s about convenience as well.

A bike lock might not seem like the most luxurious thing to splurge on, but theft is no joke. Many bikes still get stolen, despite the use of locks—albeit, cheap and low-quality locks.

The truth behind this law is that any lock, in theory, with the right amount of time and firepower, can definitely be broken – even the world’s most secure bicycle lock.

So what is the point of bike locks, then?
Bike locks aren’t just there to secure your bicycle in one place. Its other purpose is to make your bicycle look intimidating to steal, help scare off amateur bike swipers, and pretty much give any thief a difficult time breaking your locks. The cheaper or more flimsy your lock looks, the more likely it is for thieves to try and break them and run off with your bike.

To find the most secure bicycle locks in the world, we have spent hours researching every type of lock and reading hundreds of user reviews. The stand out brand is Kryptonite Locks and all 3 of our best bikes of choice and from them. Michael Zane of Kryptonite actually invested the bike U lock back in 1971 when his company was born. 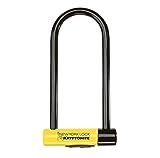 This D-Lock/U-Lock has a 4.1 out of 5 stars rating on Amazon. It is double deadbolted and made of a high-performance steel which resists bolt cutters and leverage attacks. Despite it weighing 4 pounds, buyers mentioned that it’s not as heavy as you would expect.

Buyers also mentioned that it does a good job of securing their bikes, and definitely slows down any thieves because of the quality of the metal used. This bike lock also comes with a key with a built-in lightbulb.

The best U bolt bike lock money can buy SauserWind 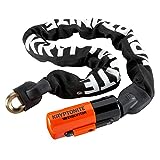 Rated 4.2 out of 5 stars on Amazon, this Kryptonite chain lock boasts of a drill-resistant and pick-resistant deadbolt. It comes with a durable weather-resistant nylon sleeve that protects your bike from getting scratched up from an otherwise bare metal lock.

Amazon reviewers praised this lock for doing its job and stating that although it is very strong, it is also very heavy, weighing at about 6 pounds. Many buyers favoured this lock because of its versatility and flexibility, while others purchased it along with a D-Lock/U-Lock as a secondary safety measure.

The ‘Fahgettaboudit’ Kryptonite U-Lock has double deadbolt locks and a name that can only be pronounced à la Robert de Niro in the Sopranos.

Rated 4.3 out of 5 stars on Amazon, buyers said that this particular lock will give you peace of mind, even when you’re leaving your bike in a dicey part of town. Like most Kryptonite bike locks, this model also comes with a key with a built-in lightbulb so you can easily unlock and lock even in the dark.

A biker’s pro tip when it comes to security.
Whichever type you do decide on, remember that your lock is only as good and only as effective as the object you’re securing it to. Make sure that whatever structure you’re locking your bike to, it’s not going to be something that’s easily moveable or transportable.

Another tip is not to rely on one type of lock—if you can get two types of locks for your bike, then that just doubles up the chances for it to be more secure and scare off any potential bike thieves.